By Glenn Bleakney
In order to understand the following more completely, we recommend you read my previous post first: It is called “2014 Year of the Open Door.” https://www.awakenations.org/prophetic-word-2014/

Yesterday while worshipping at a local gathering of believers, I experienced a very brief vision: 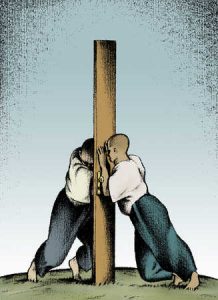 I saw a man standing at a door trying to push it open. On the other side of the door was another man who was placing all of his body weight against the door. It was obvious that he was attempting to prevent the door from opening. The more the man tried to push open the door, the more resistance he met. Eventually, he became so tired that he could no longer continue his efforts. He took a break and then tried to push the door open. All of his attempts were in vain.
Then from heaven, a voice spoke saying, “You’re going about this the wrong way; pull the door open.” The man realized his error and reached for the handle and pulled the door toward him easily opening it. Meanwhile, the person on the other side of the door fell through the door frame landing flat on his face. There was a look of surprise on his face. He immediately looked up at the man and said. “You figured it out. It’s too late! I can no longer stop you.” The man then stepped over the man on the ground and across the threshold with no resistance and proceeded to walk toward a wide open field with beautiful scenery.

I shared previously, 2014 is the “Year of the Open Door.” See https://www.awakenations.org/prophetic-word-2014/ 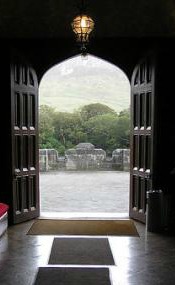 As I pondered the vision, it became apparent that the Spirit was saying that many have been attempting to move through the door into their destiny through their own efforts resulting in them encountering strong resistance from the Devil and his hosts of wickedness.

Moving through the door into Kingdom power, provision and direction in 2014 requires that we no longer strive in our own efforts. We must still ourselves to listen for the voice of God and for His clear instruction regarding how to go through the door. “Cease striving and know that I am God…” (Psalm 46:10, NAS).
By necessity, we will need to make a commitment to linger in the presence of the Lord until we hear clearly and comprehensively from Him. We must be like the prophet who said, “He wakes me up in the morning, Wakes me up, opens my ears to listen as one ready to take orders. The Master, God, opened my ears, and I didn’t go back to sleep, didn’t pull the covers back over my head” (Isaiah 50:4-5, The Message). As we wait upon the Lord, we can rest assured that God will speak unmistakably. “Whether you turn to the right or to the left, your ears will hear a voice behind you, saying, ‘This is the way; walk in it'” (Isaiah 30:21, NIV).

There are evil paths that lead to destruction. There are also many good paths that one can choose to walk upon, but the way to breakthrough is by finding the God-path in your present season.
Do not merely seek an “open door” as a sign of determining the will of God for your life. There is a better way than this! In the New Testament the Holy Spirit wants to speak clearly to us. Why settle for ‘sign language’ communication when you can hear God’s voice and know His thoughts. Jesus said, “I’m no longer calling you servants because servants don’t understand what their master is thinking and planning. No, I’ve named you friends because I’ve let you in on everything I’ve heard from the Father” (John 15:15, The Message).

“In all your ways acknowledge [know personally and intimately] Him and He shall direct your paths” (Proverbs 3:6).
“Commit your way [path] to the Lord; Trust also in Him and He shall bring it to pass” (Psalm 37:5).