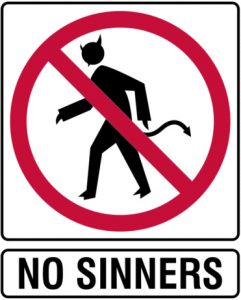 We are the righteousness of God in Christ because of Jesus’ shed blood and the power of grace alone (2 Corinthians 5:21). Religion, self-effort, philanthropy and men’s good works could never suffice in meriting a position of worthiness before God. However, there is deeper revelation to the efficacy of the blood of Christ. God says, “…the life is in the blood…” (Lev. 17:11). When we were born-again, we were given new life (Romans 6:4).
This new life is nothing less than the very nature of God Himself abiding in us. The New Testament clearly delineates this truth. 2 Peter 1:4 states we have become partakers or sharers of the divine nature.
John under the inspiration of the Holy Spirit is even more emphatic: “Those who have been born into God’s family do not make a practice of sinning, because God’s life is in them. So they can’t keep on sinning, because they are children of God” (1 John 3:9, New Living Translation).
The traditions and teachings of men as well as an innate sense of personal unworthiness often keep us from fully appropriating this revelation: you are not “a sinner saved by grace.” On the contrary, you are a “saint empowered by glory!”
As such, you can live like Jesus did on the earth, overcoming sin and the powers of darkness, performing miracles, signs and wonders. Failing to be fully persuaded of your dominion destiny and powerful potential will produce an antithetical form of Christianity that is impotent and nonlethal. The powers of darkness scoff at such powerless religion!
Many religious teachers, on the pretext of keeping you humble, will attempt to dissuade you of embracing your potential in Christ as a son of God. Don’t believe it for a moment! Here is what the word of God says: “I will give you a new heart and put a new spirit in you; I will remove from you your heart of stone and give you a heart of flesh. And I will put my Spirit in you and move [enable, aspire, empower} you to follow my decrees and be careful to keep my laws” (Ezekiel 36:26-27, New International Version, Emphasis added).Remember that when Jesus came to earth, He emptied Himself, became like other humans and took on the form of a servant (Philippians 2:6-7). Every miracle He performed on the earth, He did as a man in the Spirit, not as God in the flesh!We have been equipped and empowered to do the same! “Those who say that they live in him must live the same way he lived” (1 John 2:6, God’s Word Translation). This is because the life of Christ and the nature of God Himself is our new nature! For that reason we are super-natural!

“When the crowds saw this, they became frightened and glorified God for giving such authority to humans” (Matthew 9:8, International Standard Version).