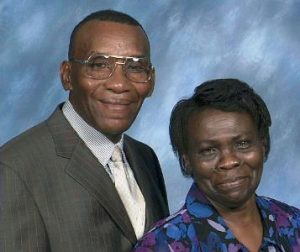 Winford Graham and his wife Edna pastor Overcomer Church of God in Palm Bay, Florida.
In September of 2010, Glenn and Lynn Bleakney had the privilege of conducting a 4 day miracle conference. Unknown to the Bleakney’s at that time, Edna Winford had stage four cancer and here prognosis was doubtful. Then something very supernatural happened.
Glenn and Lynn Bleakney had finished sharing from the word of God and had invited anyone desiring a touch from God to come forward for prayer and the laying on of hands. Subsequent to praying for several people, Edna approached the Bleakney’s sharing that she was very ill and that her sisters had died of cancer also. She asked for prayer for a miracle! Glenn and Lynn spoke to the cancer and commanded it to die and leave her body proclaiming ” You will live and not die!”
The very next day Sister Edna felt better. She had not eaten anything in several days and now her appetite was returning! She also made the decision to cease undergoing chemo treatments. That was over four years ago and Edna is cancer free. According to her doctors, a miracle is the only explanation for what she has experienced!